Without fail, every autumn, the crisp air and bright foliage cause me to recall the time in 1979 I went with my girlfriend Carol and two of her friends—a married couple, Greg and Dorinda—on a day trip to Philadelphia.  We lived roughly 150 miles from the city, on Long Island, and Carol’s friend, Greg, drove.

I well remember that period in my life—my late teens; I had a particular fondness back then for strolling about big cities—especially on clear, bright autumn days such as this one.  And in Philadelphia, I recall how the crisp October breezes formed colorful whirlwinds—leaf devils—that skated through intersections and up and down the sidewalks—how the immense cumulus clouds, caught in 30-mile-per-hour winds, pushed massive shadows in their wake, down the streets and up the sides of buildings. 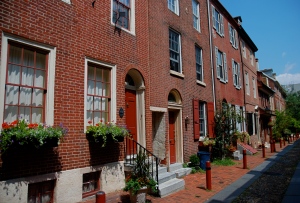 It was interesting to see how the Old World existed alongside the New.  Buildings that might have been built in 1770 stood beside structures from perhaps 1970.  We ambled along a cobblestone road where a plaque in the ground informed us we were also traversing the roof of someone’s house from the late 1700s. 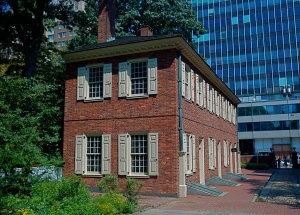 Carol and I had been arguing (as usual), and (as usual), there were some hard feelings between us that day.  And although I was silent and morose as we walked from one historic place to another—learning new things about Ben Franklin and George Washington, seeing the Liberty Bell and all the touristy stuff—Greg and Dorinda were used to ignoring the tension between us.  And Carol, as was typical for her, had a great time with them—while ignoring me.

I was nineteen, and although I worked full-time, I never had much money in my pocket.  I’d started the day out with maybe $10—but I knew I wouldn’t need much.  Most of our activities were free, and if we did pay an admission fee to anything, it wasn’t more than a dollar or two.  But everything cost me double because I also paid for Carol.  By late morning, Greg was a little peeved that I no longer had enough money for certain spontaneous activities or admission fees.  Greg and Carol were close friends, and so this created a kind of solidarity between them; now they could both be angry with me, and I could be angry with Carol—and now I could be a little peeved at Greg for being peeved at me.  Dorinda was never angry with anyone.

We grabbed a table at a pretty decent restaurant for lunch, and I found something on the menu that I really wanted that cost $6.  And although I was now down to about $2, I knew that Carol had a twenty, recently earned from her new job—her first steady employment.  So naturally, I figured that even though I was almost broke, like any long-time couple—friends—who are “there for each other”, she’d be there to pick up the slack.

When I gave my order to the waitress, Carol looked at me and asked, “Do you have any money?”  The waitress paused and looked at the others, Dorinda looked up at the ceiling, and Greg smirked at Carol.

Despite all the money I’d spent on her that day—indeed, over the past two years—all the gifts I’d lavished upon her—Carol clutched that twenty bucks tighter than a life jacket on the Titanic.  It was hers, damn it!

And this was incredible.

I calmly asked Greg for his keys, got up, and politely told them I’d be waiting in the car.  I was so angry, I didn’t want to be anywhere near her.  She actually let me go hungry that afternoon when it was within her power to do otherwise.

The three of them took their time while I waited outside; it gave me time to think of all the times I had treated Carol to lunch during the past two years.

Later, at a museum, while the three of them watched a short film about the city’s history, I sat alone in a common area outside the small indoor theater, fuming and brooding—and trying to comprehend my girlfriend.  Unbeknownst to me, the architecture was such that the audience exited from a place below the balcony where I was sitting, and when the film was over, I was unaware that everyone was leaving.  While Greg and Carol walked (hurriedly, I presume) toward the street exit, I heard Dorinda’s shout from somewhere below me, “Eric!  We’re leaving!”  Had it not been for her, I would still be sitting there.

So … long story, short … Philadelphia is one of my worst memories—but it’s also one of my best.

And it’s because God designed us so that time would smooth the rough edges of our less-favorable times in life—causing even the terrible experiences to somehow seem “not so bad, after all”.  We tend to gloss over the bad parts—and extol the good ones—so that in our minds we end up with an amalgam similar to sand in chocolate chip cookies.

Still, I hope my old girlfriend has learned how to treat the people who love her.  And I hope she has realized by now that I didn’t deserve to be abandoned in a city far from home—with no transportation—hungry—and without even enough money to buy a sandwich for dinner.

And every autumn, I reminisce about the events of that day—over and over.  I gleefully indulge in my gritty chocolate chip cookies.

So I guess it wasn’t so bad, after all.